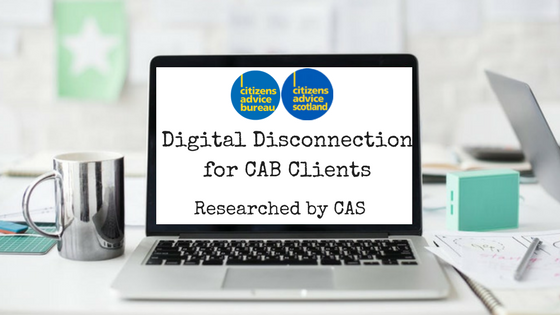 Almost a fifth of people who seek advice from Scottish CABs say they never use the internet, with more than half unable to apply for jobs or benefits online without help, according to new research published today by Citizens Advice Scotland.

The data is a concern because many social security and justice services are now only or manly accessible online, which means that many people are not getting the essential support they need.

The survey of over 1,200 Scottish CAB clients found that:


When asked what were the barriers to internet use, 18% reported it was the cost of broadband, 17% said phone costs, and 64% said they had not received any training or support in internet use. 41% of respondents in rural areas reported poor broadband connectivity.

“These findings clearly show that many Scottish CAB clients still have difficulty using digital services, either through lack of skills or lack of access. While the research also shows that younger people are more proficient than the older age groups, the general picture remains a concern.

“Although the sample for this survey cannot be said to represent the Scottish population as a whole, it nevertheless indicates that Scotland is not yet at a stage where key services like social security and justice can be moved entirely online without excluding a significant proportion of society from them.

“We therefore suggest that all key public services should continue to have alternative options (e.g. paper-based systems) available to people who are not able to competently use online services.

“In the meantime, we commit to working with the Scottish government, Digital Scotland, the Scottish Council for Voluntary Organisations and others to improve people’s digital skills and levels of digital access.”

The research is set out in full in our report, Disconnected.